It’s time to clear out the Stupid Bad Memes hopper once again: here are a few more memes that are irritating, but not irritating enough to write an entire post about.  If you missed them, check out parts 1, 2, and 3 of this “series”.

First, a grammar quibble:  do not use an apostrophe when making words plural.

Second: Women aren’t meat.  Unless you are a vegan/vegetarian, meat is something you consume, at the expense of another creature.  To equate a woman’s body with meat is to say that she is something to be used, to be devoured.  A man who thinks of a woman as meat believes that she exists solely for his enjoyment.  If you’re interested in reading more about the connection between sexism and meat consumption from a feminist-vegetarian perspective, you should read The Sexual Politics of Meat, by Carol J. Adams.

Third: body shaming works both ways.  I understand and respect the push-back against shaming curvy people, but I don’t think the appropriate response is to shame skinny people (which I assume was the purpose of the hideous statement “Bones are for dog’s” [sic]).  Everybody needs love and acceptance, regardless of body type.  Furthermore, the male of the species should not be separated into dogs and men based on their sexual proclivities.  Some men like skinny women, some men like curvy women, some men like other men, some men like everybody, some men like nobody.  Let’s not band men (or women) into false dichotomies for the purpose of a stupid meme.

And while we’re on the topic of attraction… 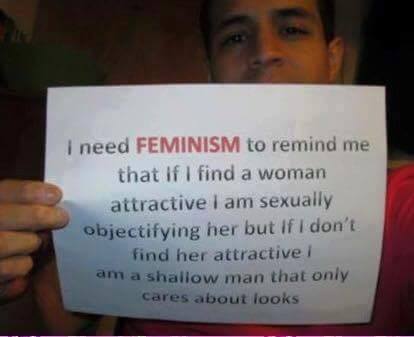 Nowhere in feminist theory does it say that a man cannot be attracted to a woman based on her looks, nor that a man who doesn’t find a particular woman attractive is shallow.  The only thing feminists would request is that regardless of whether you find a woman attractive or not, you treat her with the same basic respect and dignity you would show to men.

Anti-feminists like to pretend that the feminist agenda is to subjugate men by placing them in no-win situations, but we know that’s not true.  Feminism has never been about subjugating anybody, but in achieving equality across the board.  Why does a movement interested in equality call itself the feminist movement, then?  Because historically, women have been victimized, subjugated, and de-humanized to a far greater extent than men.  In a society where men rule, women are often second-class citizens.  Feminism aims to correct this imbalance, not to turn the tables on men.

On the lighter side, we have this bit of fluff.

Those of us who have the privilege of education know that privilege is spelled with two I‘s.

We assume there is one Universe (for lack of direct evidence to the contrary).  Also, as per the decision of the International Astronomical Union in 2006, our solar system contains only eight planets.  Sorry Plutophiles!  But if we’re considering the entire Universe, then there seem to be uncountable zillions of planets.  Nevertheless, the abundance of planets in the Universe has little to do with you meeting your true love.  Every human in the Universe lives right here on Earth.  If you haven’t met your soulmate yet, take heart; he or she is definitely within 13,000 kilometers of you.  On the scale of the Universe, that’s less than a stone’s throw.

The number of coutries, islands, and seas really depends on how you define each term.  For example, as of 2016 there are 195 officially recognized countries, but I suppose that’s a matter of politics.  Also, there are well over 809 islands in the world, especially if you include river and lake islands, but a great many of them are uninhabited and therefore unlikely to be the site where you meet your life partner.  And that whole 7 seas business has to go; we’re not ancient mariners here.

So it’s fine to create a romantically-inspired meme, but please…do your homework.

Did you know you can write sentences without capitalizing the first letter of every word and we’ll still be able to read them (no matter how much we wish we couldn’t)?

An immigrant is a person who goes to live permanently in a foreign country, regardless of whether they followed legal channels or not.  Somebody who swims across a river in pursuit of a better life is just as much an immigrant as somebody who files paperwork.

This is a poor analogy, and the author’s high school English teacher must be very disappointed.  For the most part, immigrants are not coming to the United States to take something you worked hard for.  On the contrary, studies show that undocumented immigrant workers actually improve the financial situations of documented and native workers.  Unlike the common thief who breaks into your home and steals your jewelry, immigrants provide valuable services as well as ethnic and cultural diversity.  That’s why I think that instead of trying to tighten immigration laws, we ought to consider fast-tracking the naturalization process.  Even the most hardened anti-immigrant bigots ought to appreciate the value of having more hard-working, tax-paying citizens in our communities, right? 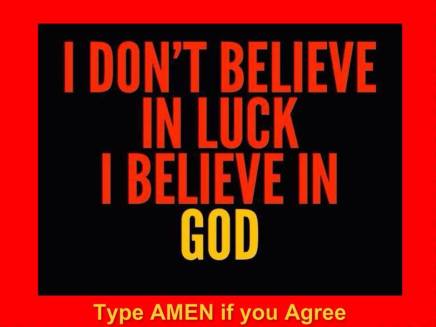 Those are not mutually exclusive things.  Suppose a bank robber manages to escape with the loot mere seconds before the police arrive.  Would you say that he got lucky, or would you contend that God helped him out?

On the other side of that coin, suppose a pious man is walking to church when he is struck and killed by a car.  Is this bad luck, or does God have it in for him?

If you believe in God, that’s fine.  It’s your choice, after all.  But it seems silly to me to assume that the existence of God precludes the existence of luck.  Sometimes good (and bad) things happen without the agency of a higher power.  If you claim that all instances of so-called luck are really the mysterious and unseen movements of a loving, divine being, then you must be prepared to explain the fact that (A) sometimes bad people have good luck, and (B) sometimes good people have bad luck.

We’ll discuss the overt sexism in this meme soon enough, but first I have a few quibbles with the grammar and with the illustration.

Also…there appears to be some kind of steel wall between the front and back seats of this car.  There is clearly a mirror, but it is rendered useless by the lack of rear visibility.  Surely this poor car design will contribute more to accidents than any other factor.

Now then…the message behind this idiotic meme is that men could drive more safely if their female passengers would just, you know, shut up.  Apparently, female chatter accounts for a whopping forty-five percent of all traffic accidents, which makes me wonder why they never warned us about riding with women when I took driver’s ed.  Apparently the feminist agenda machine got to my school before they could tell us the truth.

Now it is true that the leading cause of car accidents is distracted drivers, and the chatter of passengers is a source of distraction; however, many drivers are also distracted by talking on the phone, texting, eating, grooming, and reading, and none of those distractions are depicted here.  I find it interesting that the author of this meme thought that the only way to silence passengers – and in particular female passengers – is to physically gag them.  How typical.  How disgusting. 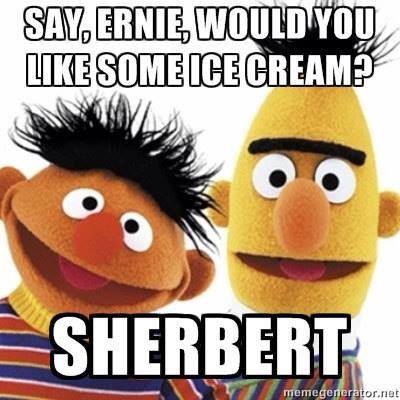 That’s all for now.  Good night everybody!

Wow, isn’t it cool how this meme manages to insult both guys and girls at the same time?

Stick with me on this one: if it’s bad to make women feel horrible because they’re not rail thin, what makes it acceptable to do the same thing because they’re not curvy? I’ll tell you: nothing makes it okay. Let’s just stop this. Ladies, no matter what body shape you have, if you’re interested in being in a relationship with a man, there’s a man out there who’ll be interested in you. I promise. We’re not the single-minded cretins that memes like this make us out to be.

For example, I take umbrage at the notion that I, as a man, am supposed to decide who I like based on her body shape. There are so many considerations that go into choosing an ideal companion: What are her hopes? Her ambitions? Her favorite movies? Does she like dirty limericks? Does she hold any advanced degrees? What are her political opinions? Is she religious? Does she like yoga? Does she listen to Weird Al Yankovic? Did she go to school with anybody famous, and if so, what juicy gossip does she know about that person from when they were younger? Can she speak Pig Latin? Does she prefer Lost or Breaking Bad? Pepsi or Coke? Does she have an opinion on the Designated Hitter Rule, and if so, can she explain it to me?

If I were in the market for female companionship, the answers to these and many other questions could be critical in determining our future happiness together. Unfortunately, I can’t determine the answers to any of these questions from a photograph of a woman in a bikini. So please, Mr Meme Maker, don’t presume to tell me what I like. And do not presume to dismiss the attractiveness of any person if they don’t fit into the mold that you find most pleasing.