It’s time to take a look at a few memes that are Stupid and Bad, but which don’t warrant an entire post.  Enjoy! (Here are parts 1 and 2, if you missed them.)

The mind of a smart man asks “Is it legal and right, and if it’s not legal, does the rightness of it outweigh the possible legal ramifications?  Is right for me the same as right for everybody else?  Is my right more important than other folks’ right?  If I think that something illegal is nevertheless right, should I try to reform the laws concerning that thing, or should I just do as I wish and damn the consequences?”  And then the smart man starts to realize that ethical decisions are far more complicated than the simple dichotomy suggested by this meme.

Be aware: if anybody has ever called you a slave because you concerned yourself with questions of legality, that person is a fool, and he’s no friend to you.  A real friend would not offer a false dilemma like this one in order to goad you into making potentially life-altering decisions.  A friend would encourage you to consider all aspects of an ethical decision – legality, fairness, long-term consequences, and so on – before making an informed decision.  And if, in the end, you decide that the rightness of an act is more important than its legality (or lack thereof), then so be it.  But at least you’ll have considered all the relevant details and will have made your decision accordingly, and you’ll know that you’ve made your decision not just as a free person, but as a wise person. 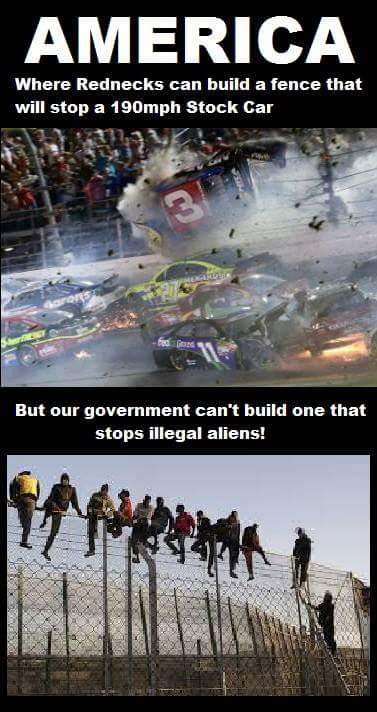 So, yeah.  Building a 2000-mile-long fence across various types of terrain is altogether a different task than building a 2-mile-long fence around a NASCAR track.  This meme’s author is trying to compare apples to oranges, and probably feels terribly clever for doing so.  To the author:  Stop it.  You’re not clever.

This is a personal quibble and I understand if you disagree, but I hate these little “math” puzzles posing as intelligence tests.  It’s not that I don’t get it.  I get it.  I see the pattern, and given any pair of numbers, I could generate the expected “solution”.  For example:

Now that’s clever.  But I digress.  The problem with these “math” puzzles, besides the fact that they use non-standard definitions for the plus and equal signs, is that they aren’t intelligence tests at all.  They’re nothing but sharebait.  The “puzzles” presented in these memes are generally trivial in order to maximize the number of people who solve them and pass them along.  Why?  Because a challenging puzzle – a puzzle that really makes you work for that shot of self-satisfaction when you solve it – would hardly get any exposure at all.  These stupid math puzzles give you the impression that you’ve done something smart, when all you’ve done is cleared the minimum hurdle necessary to share somebody else’s meme. 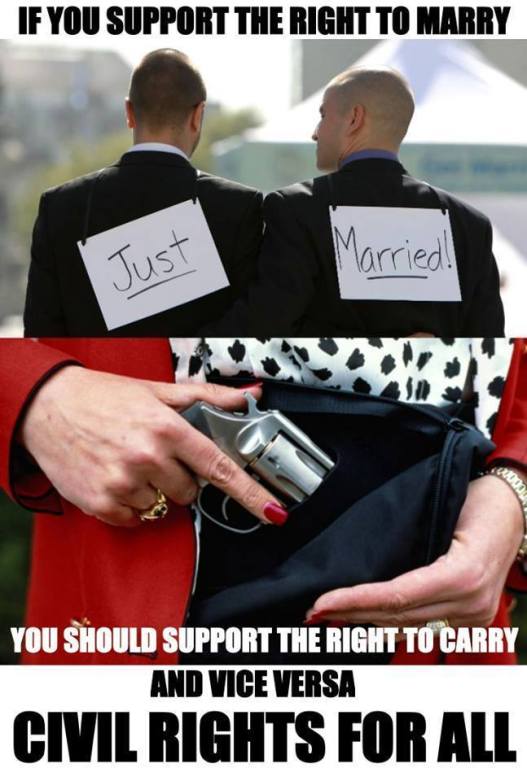 Capital idea!   Our approach to gun ownership should exactly mirror our approach to marriage: it’s only legal with the state’s consent and it must be thoroughly documented!

Or would you rather just acknowledge that marriage rights and gun rights are separate issues, and that supporting one doesn’t obligate you to support the other?

I’d say you’re wrong, Morpheus.  You might be successful because of your education and hard work, but you’re privileged because of the station into which you were born, and because of society’s reaction to that station.  Ignoring privilege doesn’t make it go away. 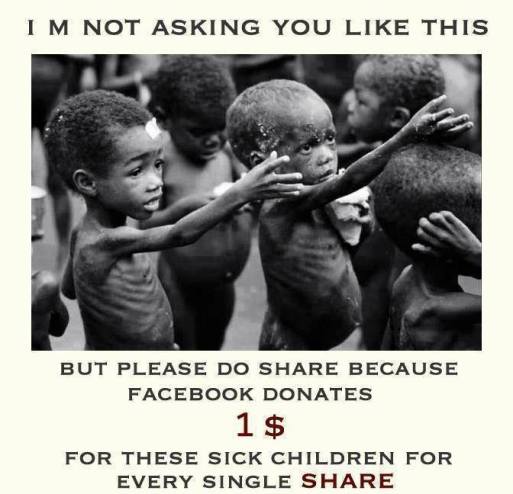 No it doesn’t.  Facebook’s charitable donations are not affected by the number of people that share a meme.  Just like the math puzzle above, this is sharebait.  Its only purpose is to reward you with a false sense of self-satisfaction in exchange for a minimum amount of effort.

If you want to make a real difference, donate real money to real organizations that are working to alleviate hunger and sickness in developing nations.  If you’re a genuine activist, leave the comfort of your home and nation to volunteer in the regions struck by famine, war, and poverty.  Real change takes real effort; clicking “Share” on Facebook isn’t going to do it.

Did you ever read something so blatantly sexist that you have to read it twice because you’re certain you misread it the first time?  For me, that’s this meme.  Yowza, what a load of sexist bullshit!  I didn’t even realize they had memes back in the 1950s!

“When an angel misses you”?  Are you operating under the misconception that angels are the departed souls of our loved ones?  Because if you are, I have to tell you: that flies contrary to your own religious dogma.  I researched the topic briefly, and here’s the theological consensus, as best as I can tell: angels are not humans, nor have they ever been.  According to most religious scholars, angels were created by God specifically to be his right hand not-men; humans, on the other hand, are spiritual beings in physical bodies.  Death is not some kind of graduation from human to angel; it’s merely a passage from physical human to non-physical human.  Or so the Scripture goes.

If we take this meme at face value, it raises all sorts of interesting questions:

I eagerly await the advisement of learned theologians on these queries.

One thought on “Quick Memes, Part 3”