I’ve had a few memes sitting around for a while that just didn’t seem to merit an entire post.  Enjoy!

Actually, we have to stop this recent culture of people not giving a f*** when somebody else is offended.  You might not understand why somebody is offended, or if you do, you might not agree with their indignation, but the least you could do – the most basic acknowledgement you could afford somebody – is to recognize that they are offended, and perhaps to offer your condolences.  Don’t worry…you can still maintain your tough guy individualist persona without being a total jerk to everybody.

Either this meme is a complete non sequitur, or it’s suggesting that many of the societal issues which are frequently blamed on guns (and the public’s easy access thereto) could instead be solved by a liberal application of parental strictness.  It’s hard to imagine how we might test this hypothesis in the United States, so let’s look to other nations.  A 2010 study assessed the relative toughness of parents in Canada, France, and Italy.  The results showed that Italian parents are the most strict, French are moderate, and Canadians are fairly laid back.  If I’m correctly interpreting this meme’s implied hypothesis, gun violence should therefore be most pervasive in our neighbor to the north, and least common in Italy.  But is that the case?

In a word: no.  A 2012 tally of firearm-related deaths per 100,000 population per year lists 0.51 for Canada, 0.06 for France, and 0.71 for Italy.  There doesn’t seem to be a strong correlation between parental strictness and gun-related deaths, at least among those three nations.

Now I’m not going to preach about gun control this time: you may make of these statistics whatever you like.  But know this: there’s no reason to think that stricter parents will lead to a decrease in gun violence.

Although the Bible never explicitly states that all Angels are male, it always refers to them in masculine terms, and they always seem to appear as men.  Some argue that Angels are genderless.  While I suppose it wouldn’t be beyond the power of an Angel to assume a feminine form, this picture is not, strictly speaking, Biblically-based.  That’s not a point against the picture, by the way.

Also, here we see another example of the awesome power of Facebook to bend the will of the Immortals.  Zuckerberg be praised!

Perhaps you remember learning the Order of Operations in elementary school.  You may have learned Please Excuse My Dear Aunt Sally, or PEMDAS, which tells you that when you evaluate a sequence of mathematical operations, you should first heed anything in parentheses, followed by exponents, multiplication and division (left to right), and addition and subtraction (left to right).  If you’re a PEMDAS purist, you get 7 as the answer:

Here’s the trouble: contrary to what you may have been taught, there is no single correct Order of Operations, as this video demonstrates.  In fact, the Order of Operations we’re taught in school is quite arbitrary.  This problem could be correctly evaluated to give several different answers, which means it is ambiguous and therefore useless.  Writing intentionally vague math problems and then demanding that your audience use one particular Order of Operations to get a prescribed answer does not show how smart or dumb your audience is; it shows how much of a pedant you are. 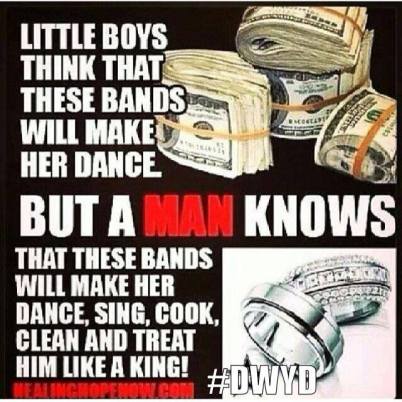 Now I know there are women who happily make their living as housewives, cooking and cleaning and so on, and that’s okay.  I’m just really uncomfortable with the idea that a marriage band mandates a woman to that kind of life.  I just can’t get rid of this idea that a marriage should be an equal partnership, with each partner able to pursue his or her ambitions.  The view of marriage expressed in this meme is…well, it’s kind of Medieval.