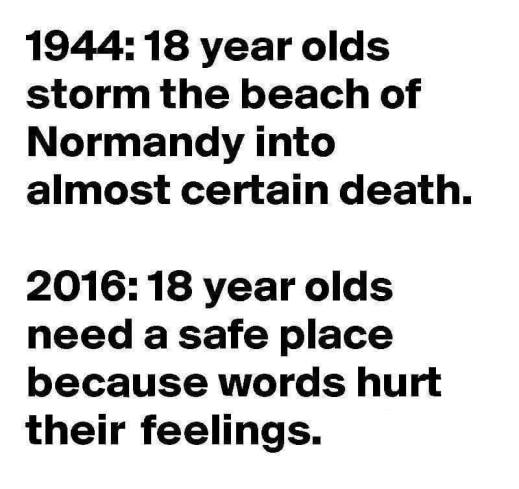 You probably know at least one person on your friends list who spends his time griping about political correctness and outrage culture.  This person uses words like triggered and safe space mockingly, and bemoans the fact that those darn kids are being raised as emotion-saturated pansies.  Hell, you might even be that person (in which case: welcome!  What brings you to my blog?)

This attitude is not new.  The idea that the most recent generation is somehow worse than their ancestors goes back at least as far as the Bible, and probably further than that.  Each generation of humans has examined their progeny and found them wanting.  They were either too lazy, or too drug-addicted, or too peace-loving, or, in the case of the current youth, too sensitive, for their own good.  Those of us who have passed the hurdle of emotional maturity gaze upon the youth and shake our heads forlornly.  What is the world coming to?

Of course it’s all a matter of perspective.  We who have inherited the mantle of maturity seldom recall that we were once the feckless youth scorned by our parents’ generation.  We were once thought of as idealistic, shiftless, poorly prepared to meet the rigors of the modern world.

Still, when we compare any modern generation with the brave youth upon whose shoulders the success of D Day rested, we must certainly conclude that we have lost a certain toughness, right?  Aren’t today’s youth a bunch of whiny, sheltered brats compared to the all-balls commandos who ran into the jaws of death in defense of freedom?

In my mind, it’s not a fair comparison.  The 18-year-olds who stormed Normandy were put into an extraordinary situation.  And they were afraid.  Who wouldn’t be?  They were seasick, and terrified, and in many cases they had just recently left boot camp.  For a large portion of them, this would be their first combat experience, and they were well aware that it might be their last.

No surprise, then, that many of the survivors of D Day left with post-traumatic stress disorder (PTSD), a condition known as combat stress reaction (CSR) in 1944.  The typical response to CSR was to give the soldiers a few days’ rest, after which they were frequently returned to war zones.  Little thought was given to extensive psychiatric care or prevention.  As a result, veterans from WWII and other combat situations bore the weight of their psychological trauma for decades.  When the movie Saving Private Ryan opened in 1998, the ultra-realistic D Day invasion scene at the start of the film made some WWII veterans unable to finish watching it.

We’ve come a long way since D Day, thankfully.  We understand now that people’s psyches can be damaged by situations far less traumatic than war.  Psychologists acknowledge that words can hurt as badly as sticks and stones; in fact, they’ve probably always had that power.

In the “glory days” which the author of this meme apparently pines for (when men were men and women were silent), peoples’ feelings were being hurt by the words and actions of their peers… and these people were told to hush and bottle their emotions inside, no matter the psychological cost.  They were told, explicitly or implicitly, that their feelings were unimportant, and that they were probably just over-reacting anyway.

It is not a bad thing for people to express their emotions, nor should it be a reason for mockery if a person seeks to protect his emotional well-being.  It is not your responsibility or your right to determine whether somebody’s reaction is warranted or not, Mr Meme Maker.  If you do not require emotional support and the occasional “safe space” of which you are so disdainful, then kudos to you.  How about you not be a jerk to those who do?  We’d all like to grow up as emotionally healthy as we possibly can.