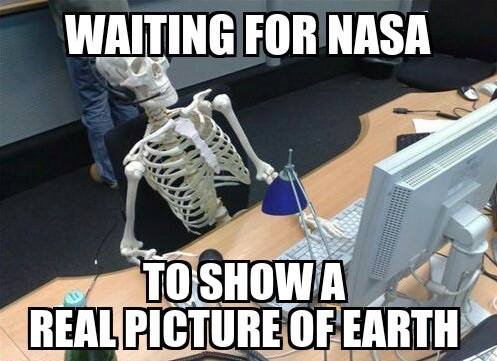 It’s interesting – and a bit infuriating – how many conspiracy theories paste the National Aeronautics and Space Administration (NASA) as one of their biggest, baddest bogeymen, especially considering that (A) NASA is one of the most transparent government agencies in existence, with a huge public outreach mission, and (B) NASA is not the only gatekeeper to information concerning the cosmos.  In other words, even if NASA knew that Earth was flat but wanted to keep it a secret, they wouldn’t be able to.  There are simply too many other people who are in a position to blow the whistle.

An article published in the Independent last month underscores the difficulty of keeping big secrets over long periods of time.  According to the article, Dr David Grimes at the University of Oxford developed a formula showing that the more people know about a sophisticated conspiracy, the more quickly it will be exposed.  Although the article focused mainly on Moon Landing deniers, Dr Grimes’s conclusions are presumably still valid when it comes to Flat Earth conspiracy theories.

Think about this: there are literally thousands – if not millions – of photographs of Earth taken from outer space.  In fact, there have been satellites launched with the express purpose of taking pictures of Earth.  NASA is just one organization responsible for launching and monitoring these spacecraft.  The European Space Agency (ESA) and Japan Aerospace Exploration Agency (JAXA) have also launched a fair number of satellites capable of taking pictures of Earth.  Here are a few of the beautiful shots of our homeworld as seen by their spaceborne eyes.

ESA’s Rosetta captured this true-color image of Earth during its November 2007 swing-by on the way to its cometary rendezvous.

JAXA’s lunar orbiter KAGUYA watched Earth “rising” behind the Moon’s horizon.  About 40 seconds have elapsed from the first frame to the last frame.

Notice anything about these images?  For starters, neither image was captured by NASA.  Also, the shape of Earth in both images is decidedly round.

Of course, dedicated Flat Earthers will not be deterred by such evidence; after all, these images could easily have been faked.  That’s the problem with Flat Earthers – nay, with conspiracy theorists of any stripe.  There is no evidence so compelling as to shake them from their convictions, which renders their convictions meaningless.

But even if we had never placed a camera in outer space and turned it back toward Earth, this meme would still be bunk.  There are many ways to know that Earth is round, even without photographic evidence.  For example, Earth always casts a round shadow on the Moon during a lunar eclipse.  Furthermore, ships sailing over the horizon disappear bottom first.  Here’s video evidence for those that have never witnessed this phenomenon firsthand:

There are several cuts in the video because the sailboat is moving quite slowly and it would take more than an hour to show the entire process.  However, if you’ve got a lot of time to spare, the uncut version can be found here.

Still not convinced?  If you’re a Flat Earther, then of course you’re not.  You have your own brand of “logic” that doesn’t mesh well with the logic used by everybody else.  Here’s one more piece of evidence – although I could go on – that refutes the notion of a Flat Earth.  If you take a trip from the extreme northern latitudes to the extreme southern latitudes, you will see an entirely different set of stars and constellations in the night sky.  The Globe Earth model explains this phenomenon perfectly.  If people are stuck to the surface of a globe, then people in opposite hemispheres each have their own set of stars that are never visible to people living in the opposite hemisphere, owing to the fact that they would be perpetually below the horizon.  For example, the North Star, Polaris, is never visible to anybody south of the equator, just as the bright star Canopus is never visible to people north of 37º north latitude.

Of course Flat Earthers have an “answer” for this as well; in fact, they go so far as to claim the shifting constellations as a point in their column.  (This is a frustrating tactic commonly employed by Creationists as well.)  According to the Flat Earth Wiki, the apparent shift in constellations as one travels southward from the North Pole (or, in the Flat Earth model, outward from the center) is caused by nothing more than perspective.  You see, in the Flat Earth model, the stars are not light years away.  Instead, they are merely thousands of miles above our heads.  The pole star is directly overhead when one stands in the center of the disc Earth, and as one moves outward, it shifts downward toward the vanishing point.  When you have moved sufficiently far from the central point of the disc, Polaris sinks and vanishes into the haze of the horizon.  Meanwhile, stars that are further outward “rise” and become more prominent as you position yourself beneath them.  Isn’t that neat?

One major problem: there is also a south celestial pole.  Although there is no star currently positioned prominently near the south celestial pole, there still exists a point in the southern skies around which all southern stars seem to revolve on a nightly basis.  This wouldn’t happen on a Flat Earth.  On a Flat Earth, the farther south you went (meaning, the closer you got to the Antarctic ice wall), the further removed you would be from the center of the sky’s rotation.  As you brushed against the shores of Antarctica, all the stars would seem to zip by overhead, moving much faster than their more northern counterparts, since they are much further from the center of rotation.  This is exactly the opposite of what we observe.  In the far southern hemisphere, the stars high above seem to trace smaller and smaller circles as they get closer to the south celestial pole.  Only at the equator do the overhead stars seem to have the fastest nightly velocities with respect to the ground.  Try as they might, Flat Earthers cannot fit the facts of the night sky into their model…because their model is wrong.

There is one question that remains to be answered, and it is perhaps the most vexing: assuming that Earth really is flat and the space agencies of the world know it, why the cover-up?  What do the world’s governments stand to gain by pretending?  With other loony conspiracy theories (the 9/11 “truth” movement or the Moon landing hoax conspiracy, e.g.), the theorists have at least presented somewhat compelling reasons for the conspiracy (even though they’re still wrong).  But it’s very hard to imagine what the shadowy New World Order would gain by having everybody believe in a round Earth.

No doubt the religiously-motivated Flat Earthers believe that the “Globe Earth myth” is a lie invented by Satan to draw people away from God’s saving truth.  We saw a bit of that sentiment yesterday.  Others may simply believe that the whole-world government (Flat Earthers are typically big into that kind of idea) intends to keep people as docile as possible by keeping them as ignorant as possible.  If they can cultivate an entire species of people who overwhelmingly believe a lie, what other horrible things can they convince us to believe?

In many cases, the why of the Flat Earth conspiracy theory seems to simply be ignored.  Some Flat Earthers contend that because Earth looks flat from their perspective, it must be flat, and that any statement to the contrary is a lie.  How sad it must be to live in a world limited only to one perspective.