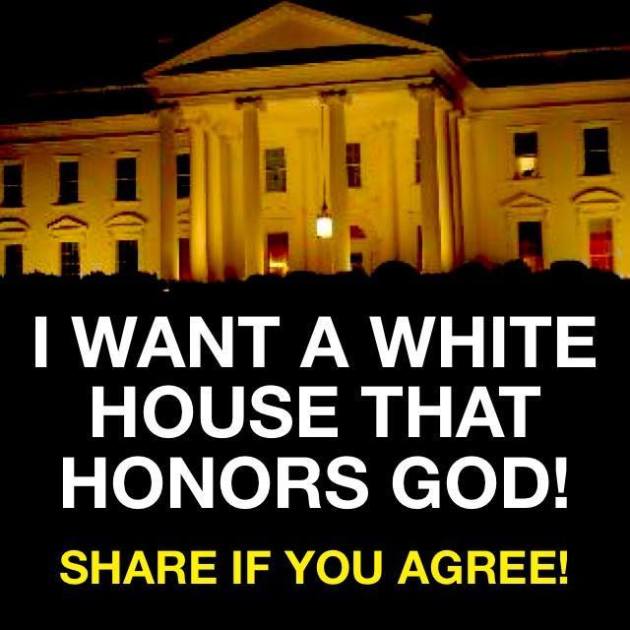 In what way, one can’t help but wonder, must the White House honor God in order to make this meme’s author happy?  I conducted a Google-quest to find peoples’ opinions on what it means to honor God.  While there was some diversity in opinion, most people held that to honor God, you should live your life devoted to Him.  (One author claimed that “honoring God” entailed living a life of sexual purity.  If that’s the case, the White House lost it’s connection to God a long time ago.)

That’s all fine, but at this point I must voice a protest against the message of this meme: While I think it’s fine for a President to honor God, the White House definitely should not.  The President is a person, but the White House is an institution – a symbolic representation of the power of the leader of the executive branch.  As the sole seat of executive authority, the White House must be firmly secular.  And while the President abides there, s/he should keep his/her religious convictions, wherever they may lie, completely separate from his/her executive duties.

Despite conservatives’ numerous attempts to retcon the United States’ position regarding religion, our nation is – and was always meant to be – secular.  The First Amendment to the Constitution makes that clear.  Congress shall make no law respecting an establishment of religion, nor prohibiting the free exercise thereof.  The White House isn’t part of Congress, of course, but it is part of the same government, and as such, it should not honor the God of Abraham any more than it should honor Vishnu, or Ra, or the Flying Spaghetti Monster.  The White House should mean the same thing to the Muslim, to the Hindu, and to the atheist as it means to the Christian.  If it doesn’t, then the White House – in fact, the entire government – has lost its status as a symbol of all Americans.  The Founding Fathers recognized this danger, which is why they penned the Bill of Rights in the first place.

3 thoughts on “Why The White House Won’t”