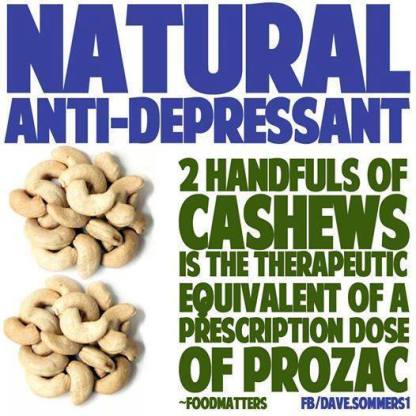 This one is hard to evaluate, because the effectiveness of Prozac is itself controversial.  Let’s start by looking at what Prozac is, and how it is supposed to affect the brain, then we’ll see if we can abandon the drug altogether in favor of Trail Mix.

Prozac is an anti-depressant (Generic name: fluoxetine) that (probably) works as a selective serotonin reuptake inhibitor, or SSRI.

Okay, that didn’t help much.  Let’s back up a little farther.

Serotonin is a neurotransmitter, a chemical messenger that is released and absorbed by your neurons, or brain cells.  When one neuron needs to send a message to another neuron, it releases a flood of serotonin molecules, which drift across the tiny gap like submicroscopic messages in submicroscopic bottles, then bind with special receptors on the receiving neuron.  The receiving neuron “reads” the message, and this changes how it behaves.  The activity of your entire brain is regulated by the release and capture of these messenger molecules.

Serotonin in particular works to regulate your mood, your appetite, and your sleep cycles.  It’s a very important biomolecule; if the levels of serotonin in a person’s brain get too far out of whack, it can have significant repercussions for the person’s mental well-being.

That’s what happens in the brain of a person suffering from major or clinical depression[1].  For the record, clinical depression is not the same as temporary sadness, or “the blues”.  Most people feel sad from time to time, but clinical depression is a serious mental condition that affects almost 7% of Americans over the age of 18, according to WebMD.  The symptoms vary from person to person: generally they include persistent fatigue, feelings of worthlessness or guilt, the inability to focus or make decisions, loss of interest or pleasure in activities one might otherwise enjoy, significant weight loss or gain, and, in the most dire cases, suicidal thoughts.

Although clinical depression can be caused by a variety of factors (often working in conjunction), it is almost always associated with an imbalance between a few key neurotransmitters, serotonin among them.  The goal of Prozac and other SSRI anti-depressants is to adjust the levels of serotonin in the brain by preventing serotonin from being reabsorbed by the neurons.  In other words, it increases the concentration of serotonin in the chemical brew surrounding our brain cells, which (theoretically) helps to stabilize a person’s mental condition.

Does it work?  Maybe.  According to a meta-study published  in the peer-reviewed, open access journal PLOS Medicine, and another one in the Journal of the American Medical Association, Prozac and its ilk are little better than placebos for people suffering from mild to moderate depression.  Only in the most severe cases of clinical depression does the drug confer a significant improvement in patient health.

But the blog Science-Based Medicine, my go-to guide for sorting medical mythology from pharmacological phact, points out that one must be careful when considering the conclusions of a meta-study.  The sources from which the meta-study is drawn are sometimes not as broad and diverse as one might prefer, leading to one-sided conclusions.  In fact, many studies have been published demonstrating that SSRIs are effective for moderate and even mild cases of depression, particularly in cases of chronic mild depression.

One thing’s for sure: all parties involved were remiss in that they made no mention of the efficacy of cashews as an anti-depressant.  Big Pharma strikes again!

Or not.  Before we can evaluate the alleged anti-depressant properties of cashews, we must have a mechanism.  According to cashew propagandists like Men’s Journal, tryptophan, an amino acid found in cashews, is converted to serotonin, and can help to boost serotonin levels in the brain, staving off depression.  Could it be so simple?

Unfortunately, no.  Nothing is that simple.  Yes, cashews are rich in tryptophan, but consuming tryptophan is not the same as taking a drug designed to block your brain’s cells from reabsorbing serotonin.  That’s not how your body works.

Of course, I’m willing to be proved wrong.  I scoured the ‘net looking for even one clinical study showing that cashews had a significant therapeutic effect on depression.  While I did find lots of alternative medicine and home remedy blogs that repeated the Cashews = Prozac myth almost verbatim, I found little in the way of corroborating evidence.  I could find no links to peer-reviewed medical journals, no quotes from actual doctors, no proposed mechanism by which a cashew-delivered tryptophan dose is meant to be converted to serotonin and delivered to the brain.  Surprisingly, I couldn’t even find much anecdotal “evidence”.  Lots of people are advising cashew therapy, but few people seem to be trying it (or if they are, they’re not talking about it much).  This relative silence is bizarre; when I researched the supposed ability of baking soda to cure cancer, I was easily able to find reports by people who thought their friends and relatives had been saved by sodium bicarbonate.  Where are the people who’ve extricated themselves from the grips of depression by downing a couple handfuls of nuts each day?

The only way this meme carries water – the only way it bears any resemblance to the truth – is if Prozac has little to no effect on mild to moderate cases of depression (as some people claim).  In that case, the meme is accurate: Prozac and cashews are therapeutically equivalent.  But if Prozac does benefit a clinically-depressed person, even one with mild depression, then this meme is like so many other alt-med claims: utterly false and unworthy of further attention.

1. The “chemical imbalance” model of clinical depression is hotly debated, as is the mechanism by which SSRIs help depression patients.

10 thoughts on “Save the Cashew Would Have Spent On Prozac”