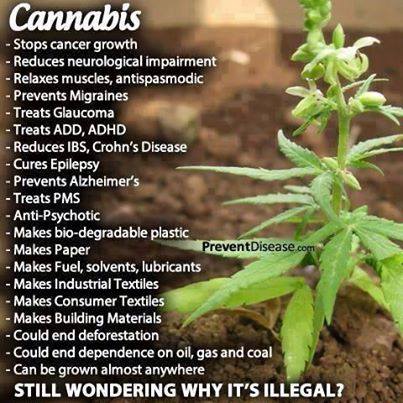 I’ve said before that it wouldn’t bother me if cannabis were legalized. I’m not a user, but I can’t think of any good reasons not to legalize the wacky weed, within reasonable limits. But as a service to cannabis proponents, may I offer this bit of advice: it does you no good to make spurious or doubtful claims in support of your cause.

Let’s investigate some of these claims and see if they hold water.

Nobody is really sure. According to Kat Arney, writing in the Cancer Research UK Science Blog, there has been plenty of research conducted on cancer cells in laboratories and on animals, but precious few clinical trials involving people. Nobody knows exactly how cannabinoid compounds, like tetrahydrocannibinol (THC), will work in an actual living patient. Only one clinical trial has been published, involving nine patients with an aggressive form of brain cancer. Although eight of the nine patients’ tumors seemed to respond to the cannabinoid treatment, none of them were cured by it; in fact, all nine patients had passed away within a year of the study. Furthermore, there was no control group for this study, so the evidence in favor of cannabis as a cancer treatment is inconclusive at best.

As always, I’d like to remind anybody who plans to tell me about how their mother’s uncle’s cousin was cured of cancer by smoking pot: anecdotes do not amount to evidence. So far the scientific community is ambiguous at best about the effectiveness of cannabis as a cancer treatment. I’m not saying that cannabis has absolutely no effect on cancer; I’m just saying that it’s not a slam dunk for the pot-proponents just yet. Better wait until the research matures before placing this as a point in your column.

The first statement is so broad that it’s virtually impossible to evaluate its accuracy. There are lots of “neurological impairments” and they display a wide array of symptoms. Some of the symptoms may be relieved by cannabis use, but again, there doesn’t seem to be much research showing that cannabis has any curative properties in patients with neurological impairments. Consider multiple sclerosis. According to the National Multiple Sclerosis Society, clinical trials involving cannabis and cannabinoids have failed to demonstrate that they halt the progression of the disease. Furthermore, MS patients who use “street” cannabis are more likely to be described as “cognitively impaired” after the initial effects of the cannabis have worn off. Finally, a recent study of the effectiveness of cannabis on spasticity in multiple sclerosis patients showed something of a discrepancy between clinical and subjective results; in other words, their spasticity did not improve in any clinically-measureable way, but the patients themselves sure did report feeling better.

Now I will admit that I did not investigate every neurological impairment to determine if Mary Jane would help, but the author of this meme provided almost no information to work with. I submit that unless the pro-pot crowd is prepared to be a lot more specific, this “just trust me” statement isn’t going to fly with those who oppose legalization.

Again, the research is lacking or inconclusive. ProCon.org holds that most evidence for the effectiveness of cannabis as an anti-migraine treatment is anecdotal. Dr. John Krusz implies a small possibility that cannabis may actually worsen headaches under certain conditions. On the other hand, Dr. Gary Wenk says in Psychology Today that cannabis has pain-blocking properties and that people who have stopped using cannabis have suddenly developed severe migraines. Whether the cannabis was preventing the person from experiencing the full brunt of their migraines, or whether the migraines started suddenly for unrelated reasons, is difficult to determine. We must be careful to avoid confusing correlation (two events happening near the same time) with causation (one event causing the other).

Cannabis does help lower the intra-ocular pressure (IOP, the fluid pressure inside the eyeballs) of glaucoma patients – with this much the medical community agrees – but some experts still argue that the effect is short-lived and that prescription drugs do a better job. According to Dr Henry Jampel from the Glaucoma Research Foundation, you’d have to toke up six to eight times a day to get round-the-clock relief from high eye pressure. That’s beyond the range of even the most dedicated weed-worshipper.

Here is another area where the research is in its infancy. TruthOnPot.com says that despite truckloads of anecdotal evidence, the scientific community has barely scratched the surface of the connection between cannabis and ADD/ADHD. Bear in mind that TruthOnPot is an unabashedly pro-pot website, so perhaps their lukewarm enthusiasm about the benefits of pot as an ADD/ADHD treatment speaks volumes.

Peter Lipson, writing in Science Based Medicine, says that these claims are implausible at best. He goes on to say that cannabis use may actually be detrimental in people that already have Alzheimer’s. There appears to be no good evidence to support the validity of any of this meme’s claims.

Supposedly, Queen Victoria herself used cannabis to alleviate her menstrual cramps and labor pain. Did cannabis really help, or did she merely experience a placebo effect? I hate to sound like a broken record, but the research just isn’t there, according to Green Cross Patient Centers. Remember, there’s a wide gulf between clinical measurements of pain and patients’ subjective reports. Clearly there’s much research to be done.

You know what’s so difficult about writing about pot? Trying to find unbiased articles regarding its efficacy as a medical treatment. Just try it. Fire up your favorite search engine and type in “cannabis anti-psychotic”. You’ll get plenty of hits, but almost every one of them will have some sort of agenda. Half of them will be pro-pot pages whose sentiments reflect the ones expressed in this meme, and the other half will be rabid conservative “family values” pages that seek to portray cannabis as Satan incarnate. It’s incredibly tedious sorting through a heap of websites that are trying to push one way or the other.

Even Science-Based Medicine has precious little on the medical benefits and pitfalls of ganja, other than the article to which I previously linked. The most objective piece I could find was an article in Time, written by Maia Szalavitz. Szalavitz writes about a clinical study suggesting that cannabidiol (CBD), a compound found in pot, may be effective as a treatment for schizophrenia, and with fewer side-effects than other commonly-prescribed anti-psychotics. That’s the first article I’ve found that partially substantiates any of the claims made in this meme.

I say partially because…the study was on CBD specifically, not cannabis as a whole. There’s no evidence, therefore, that cannabis is an effective anti-psychotic. The interactions between CBD and the other ingredients in cannabis may render its anti-psychotic properties null. In other words, just because one component of cannabis has potential as a medical treatment doesn’t mean you’ll be able to buy pot at your local CVS anytime soon.

While technically true, this series of arguments ignores one important detail: namely, the entrenched infrastructure that uses lots of materials other than hemp for construction, lubrication, clothing, etc. Here’s an example: the author insists that hemp can be used to make plastics, solvents, fuels, and lubricants – all things that are typically made from petroleum. Does the author really believe that hemp, even if it were legal worldwide, would be in a position to replace petroleum, which is (at the moment) relatively cheap and easy to obtain? Also, processing plants around the world are equipped to handle petroleum; simply switching to hemp is not an easy or attractive option. Perhaps when the oil wells finally run dry and oil shoots past a thousand bucks a barrel, hemp will become a viable alternative. But like I said before, even if the United States government decided overnight to repurpose all of its oil-processing plants for hemp processing, that still doesn’t mean that recreational marijuana would be legal. In my opinion, pot-supporters are barking up the wrong tree by singing the virtues of hemp.

Hey, so can kudzu. What’s your point?

I’ve spent the better part of this entry dispelling some of the quasi-scientific medical claims made about cannabis, so the reader may be excused for being skeptical regarding my claims of pot neutrality. To reiterate what I said at the beginning: I actually support the legalization of pot; or at least I don’t oppose it. I just don’t think it’s wise for cannabis supporters to hitch their wagons to spurious medical claims. If you want to legalize pot, that’s fine: argue about how it’s not that dangerous and it would be a source of tax revenue. Argue about how it would save money in law enforcement and reduce the prison population. Just stick to reality and you might eventually prevail.

5 thoughts on “Cannabis the Wonder Weed”