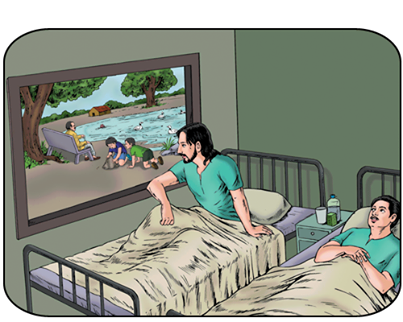 You’ll probably accuse me of being overly picky if I break down this meme and the accompanying text, especially since there’s nothing controversial about either one. It’s just a simple story of hope and happiness, and what could be wrong with that, huh? Well, I wouldn’t be doing my job if I didn’t nitpick, so let’s see.

It will take just 60 seconds to read this and change your thinking..

Two men, both seriously ill, occupied the same hospital room. One man was allowed to sit up in his bed for an hour each afternoon to help drain the fluid from his lungs.

I’m no doctor, so can somebody please explain to me how sitting up helps to drain fluid from one’s lungs? My (rather limited) understanding of human chest anatomy indicates that the lungs’ major openings all face upward, which would make draining fluid especially difficult if the patient was in an upright position. Again, I’m not a doctor. I could be wrong.

His bed was next to the room’s only window. The other man had to spend all his time flat on his back.

That is clearly not a window; it is a painting. Notice how the horizon is parallel to the top and bottom of the painting’s frame. If that were a real window, looking out on a real landscape, (1) we should not be able to see the horizon from this angle, and (2) even if we could see it, the horizon would be, well, horizontal. I realize this is a problem with the image and not the text, but I still call BS.

The men talked for hours on end. They spoke of their wives and families, their homes, their jobs, their involvement in the military service, where they had been on vacation. Every afternoon, when the man in the bed by the window could sit up, he would pass the time by describing to his roommate all the things he could see outside the window.

Based on the picture, the other man could easily see the painting…ahem…”window“. I wouldn’t nitpick about this detail, but it becomes an absolutely critical plot point at the end of the story. So yes, let’s establish this right now: based on the patients’ positions as depicted in the image above, both patients could easily see through the window, even while lying down.

The man in the other bed began to live for those one hour periods where his world would be broadened and enlivened by all the activity and color of the world outside. The window overlooked a park with a lovely lake. Ducks and swans played on the water while children sailed their model boats. Young lovers walked arm in arm amidst flowers of every color and a fine view of the city skyline could be seen in the distance.

Then why can’t we see the city skyline? I mean, we can see the horizon (although we shouldn’t be able to). Come on…did the person who drew the picture even read the story?

As the man by the window described all this in exquisite details, the man on the other side of the room would close his eyes and imagine this picturesque scene.

You don’t even have to do that, dude! Just open your eyes and roll your head slightly to the right. The “window” is right there! Also, if these men are both ill to the extent that they can’t even get out of bed, where the heck are all the tubes, bags, and monitoring equipment? What kind of hospital is this, anyway?

One warm afternoon, the man by the window described a parade passing by. Although the other man could not hear the band -he could see it in his mind’s eye as the gentleman by the window portrayed it with descriptive words.

He couldn’t hear the parade? See, this should have been a major clue that something wasn’t quite right. There is nothing quiet about a parade. I used to live about five blocks from a town’s parade route, and I could hear every single one of them. If somebody told me there was a parade and I couldn’t hear it, I’d have said they were a lying liar who lies.

Days, weeks and months passed. One morning, the day nurse arrived to bring water for their baths only to find the lifeless body of the man by the window, who had died peacefully in his sleep. She was saddened and called the hospital attendants to take the body away.

As soon as it seemed appropriate, the other man asked if he could be moved next to the window. The nurse was happy to make the switch, and after making sure he was comfortable, she left him alone. Slowly, painfully, he propped himself up on one elbow to take his first look at the real world outside. He strained to slowly turn to look out the window besides the bed.

It faced a blank wall.

Dun dun duuuuunnnnnnnn! I read a much more sinister version of this story in More Scary Stories to Tell in the Dark (1984) by Alvin Schwartz. The general plotline was old even then. According to Snopes, the story was first conceived by Allan Seager in 1934, and by 1946 it had been passed around so much that it appeared in a volume called 101 Plots Used and Abused. I wonder how Seager would feel to know that now, eighty years later, his creation is still being trotted out in electronic form.

One more thing: if only the hospital had used – I don’t know – some kind of monitoring equipment they would have known exactly when he died, instead of discovering his body in the morning.

The man asked the nurse what could have compelled his deceased roommate who had described such wonderful things outside this
window. The nurse responded that the man was blind and could not even see the wall. She said, ‘Perhaps he just wanted to encourage you.’

Okay, no. Uh-uh. Not buying it. How did the surviving patient not know that his roommate was blind? Granted, he probably never saw his roommate walking around with a cane, but it seems that in the months they spent together, something would have tipped him off. Surely the doctors and nurses that visited on a regular basis would have done or said something to indicate that the other fellow couldn’t see.

Also, how did the blind patient even know there was a painting…sorry…”window” beside him in the first place. And how did the sighted patient, who could clearly see the “window”, not notice that there was a blank wall right outside it?

The only way any of this works is if there were a barrier between the patients, so that the sighted man couldn’t see his roommate or the window, and if the attending physicians and nurses never said a single word to indicate the window-side patient’s blindness. Of course, there is no divide mentioned in the story, nor is one depicted in the image; therefore, we can only conclude that the sighted patient was willfully ignorant of his roommate’s condition. In the back of his mind, he must have known that his roommate was making everything up, and he decided to play along. But in that case, he would have known there was no point in asking for the bed by the window, unless he had started to consciously believe the lies.

One more thing: how does this count as “encouragement”? The blind man knowingly constructed a fantasy world, and he knew his roommate could not personally “experience” it until he died or was discharged. Furthermore, he had no way of knowing whether his roommate would be thrilled or sorely disappointed when he finally got the window-side bed. The blind patient was writing checks he had no intention of cashing, and for what purpose? To delude his poor roommate into believing something that might or might not be true (and probably wasn’t). That’s not encouragement…that’s cruelty.

Epilogue:
There is tremendous happiness in making others happy, despite our own situations. Shared grief is half the sorrow, but happiness when shared, is doubled. If you want to feel rich, just count all the things you have that money can’t buy. ‘Today is a gift, that is why it is called The Present .’

Oh barf. You promised me at the outset that my thinking would change. It hasn’t. I’m still just as snarky and cynical as I was a few minutes ago. Blogger: 1. Meme: 0.